Our guests communicate while travelling. To most of them a fast and reliable internet is more important than television. To our regular house guests in the lounge – who use our premises as their office – it’s crucial. So we try to have the best and fastest internet available.

We have 3 independent connections – all of them as fast as possible: One connection from the government owned NTC and two from the most professional company Worldlink.

For the last 3 months our 2 WorldLink lines haven’t worked. The speed has been OK – but the connection so unreliable that it has been impossible to update our phones, PC and tablets. To stream from networks like Soundcloud & Youtube you need to prepare for hours and downloading even the smallest files takes forever. After a while the process stops: Connectivity problems, no web. says the error message. 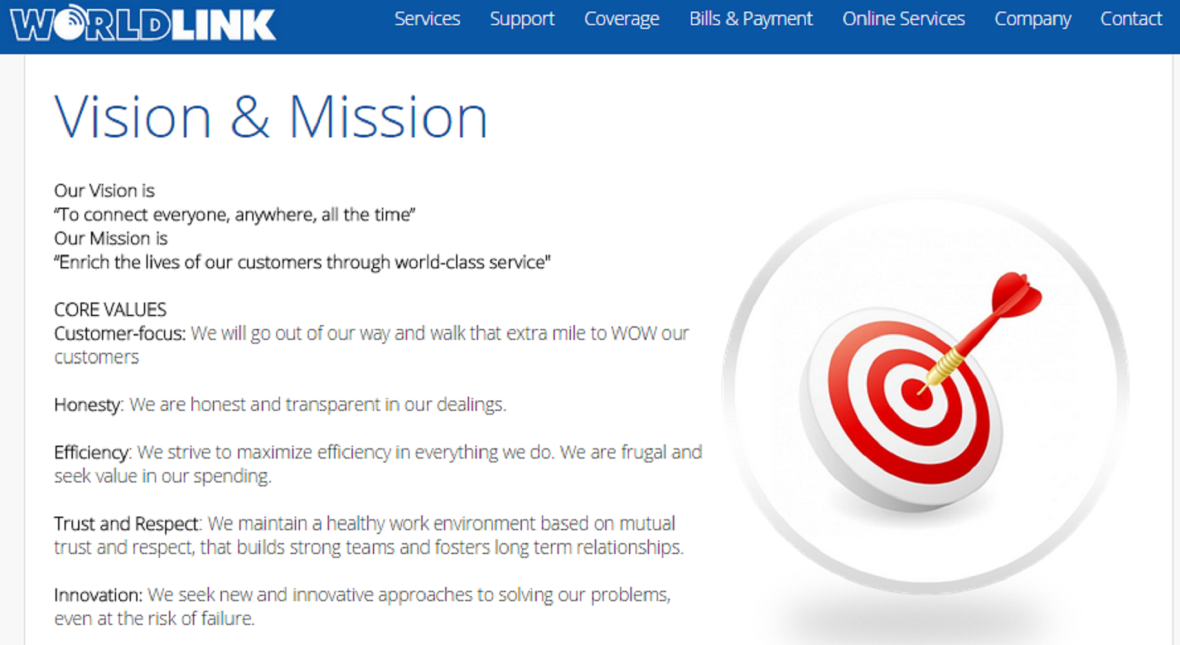 We have patiently called Worldlink for  3 months. Without any results

The last week we have called them several times pr day. No results. Last Friday we called them again and insisted on getting a technician to come.

But tomorrow is Saturday? we reminded the the 24/7 guy.

Of course it was OK.

Monday morning we called them again – just to remind them.

You are on our list. The technician will be there after 11 am. Very promising.

At 3 o’clock we still hadn’t seen a technician. So we called WorldLink again.

Oh, he still hasn’t been to your place – he was supposed to…. The 24/7 service guy was surprised.

You must call the Lazimpat office then, I’ll put you through.

The line to the Lazimpat office was busy. It’s was not possible to hold the line so we had to call the main office again.

OK I give you the mobile number of the Lazimpat branch manager. The Head Office service guy was very helpful.

When we called the Lazimpat Branch Manager his phone was was switched off. Instead we decided to go to the Lazimpat office. It’s just 3 minutes from Tings.

The technicians are on the 1st floor said the girl  behind the front office desk.

We went there and entered the door to a small room with 6 young guys chatting, half sleeping and/or looking intensively on their screens.

While Annette explained an English speaking guy about our problem, I surprised them all by stepping behind the desk to look on their screens. I wasn’t surprised to see the Facebook Chat open. The young guy whose computer I saw turned out to be the technician that should have been working with our connections.

After a few minutes fast conversation in Nepali the technician was told to go to Tings immediately.

While Annette called our staff at Tings and told them to look after the WorldLink technician and I stepped behind the desk again and took a mobile photo. As expected the home screen was the official Facebook Sign In screen. 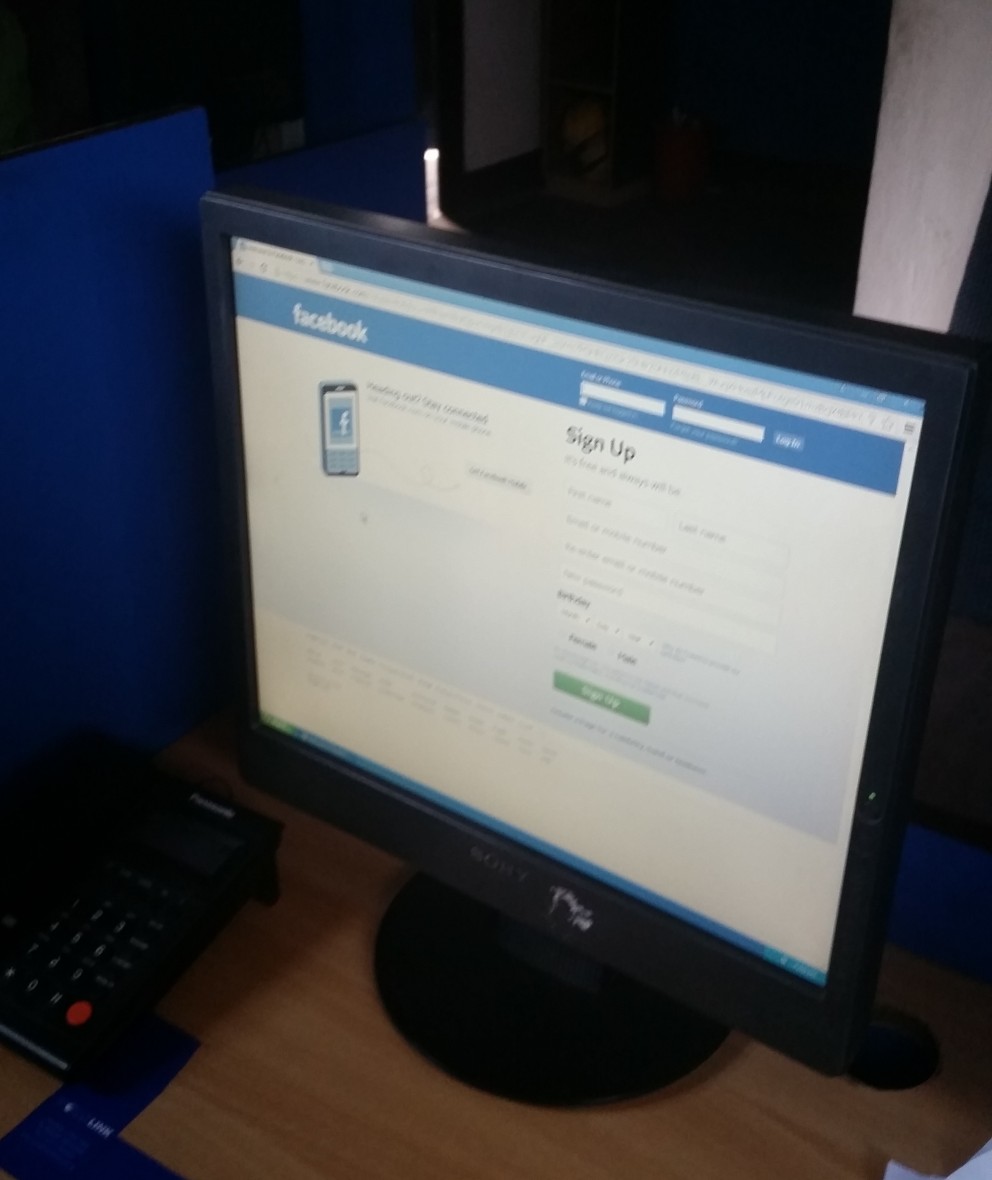 When we returned to Tings an hour later and we found out that the service guy never turned up.

I got furious, jumped on the bike and stood in their office 3 minutes later. This time the technician guy was lying on his chair half a sleep.

He was at your place – but there was nobody home the English speaking guy in the service office told me.

It’s a big surprise to me. I told them When I left 3 minutes ago there were around 20 people at my place. The guys were telling me the  biggest lie ever – and right up my furious face.

And usually you call us if the your guys cant find our place – some people do have problems finding Tings. But usually they just ask around. All our neighbours will help – or a call would.

I was now so furious that I rushed down to find someone in charge. But the boss had left. And had turned off his mobile.

I didn’t know what office I was in. But the young English speaking guy in front of me became the victim of my anger and frustration.

This time I didn’t shout. I quietly explained him the whole situation – what had happened since we started calling them 3 month ago until the lying technician a few minutes before.

Tell me one thing. (I began slowly) There are two parts in this stupid situation. Me and WorldLink right?

The guy looked nervously at his colleagues and then back to me. He agreed.

So after hearing my story – and if my story is correct – then please tell me one thing. Have we done something wrong?

So again. Coming here after 3 months finding your stupid technician guys half asleep chatting on Facebook in your office time without visiting us as promised – do you then understand why I’m angry?

The innocent guy in front of me was clearly frustrated. He had no clue about what I was aiming at.

The technician guys from first floor had now joined the party. I just went on…

So am I stupid coming here with my anger after 3 months?

No Sir – your not stupid. It’s not stupid of you.

Then tell me one thing. Before you agreed that we are to parts to create this situation. Me and WorldLink, right?

He agreed – the office was now packed with his colleagues.

So if I’m not the stupid one pleas tell me who is.

WorldLink is, Sir. The poor innocent guy was cornered.

The lying technician was clearly frustrated… hearing all his colleagues talking fast in Nepali made him nervous.

After a couple of minutes I interrupted them and looked at my young English speaking friend again.

The thing is, sir. The cable is the problem -we need to change it.

He was obviously NOT supposed to tell me that! For 3 months WorldLink had known that the cable that connected us to the web wasn’t working.

Sorry sir – we come to your place tomorrow morning 10 am.

Please come at 9 am.

Not possible sir, Our office hours are from 10 am to 5 pm.

So that’s why you have been sitting chatting on Facebook not answering your phones since 3 and your boss has switched off the mobile and left.

That was the famous drop. I shouted and rushed out.

I admit it – I clearly overreacted.

The whole situation, the lies, their attitude and the prospect of yet more months of bad Internet was just too much. I simply couldn’t control myself any longer.

All these young boys work in one of the most happening industries in the world for one of the most modern and trendy companies in Nepal. They should be proud of working here and kill to make their customers happy and satisfied. They should do their utmost to avoid this situation that they had just been through.

If the cable doesn’t work – then fix it. Waiting 3 months won’t solve the problem – it will just make things worse. Like this afternoon.

Instead they ended up being humiliated by a shouting idiot like me.

This little incident is just one in a long line of similar ones. We face them everyday. And after doing business here in 6 years, the saddest thing of them all is: It’s getting worse.

Now even our Nepalese friends, who are very dear to us, are frustrated. And I find it harder and harder to encourage our young friends not to leave the country – to stay in Nepal and change things.

We love Nepal – to see the country fall apart and see the frustration in our friends’ eyes is destroying the fun.

No matter how chaotic and stressful Kathmandu gets you can always find peace here - our #gompa in #kathmandu since 2009 #ommanipadmehum
Cinnamon Rolls... yummy
Our #Tihar Tradition - guests and friends join creative forces in creating our #Mandala - and the following #LaxmiPuja #nepal #kathmandu
Color Chaos - kathmandu ptepares for Laxmi Puja.
Home again. Looking forward to celebrate Tihar with all our friends
Imagine's

Lisbon from above. Maybe the best list of the city’s viewpoints – the free Miradouros and the Monuments & Buildings on most travelers Lisbon Itinerary, usually w. entrance fees.

According to the Chinese calendar 2020 is Year of The Rat that starts on 24 January! A good occasion to go to one of Chinatown’s called secret and illegal only 5 minutes walk from our hotel.

Things to do from Lisbon: Day Trips

Lisbon is the best city destination in Europe, Here is a list with some of our favorite day trips around 1 hour from Tings Lisbon – with links to Google Map Directions and inspiration/information. 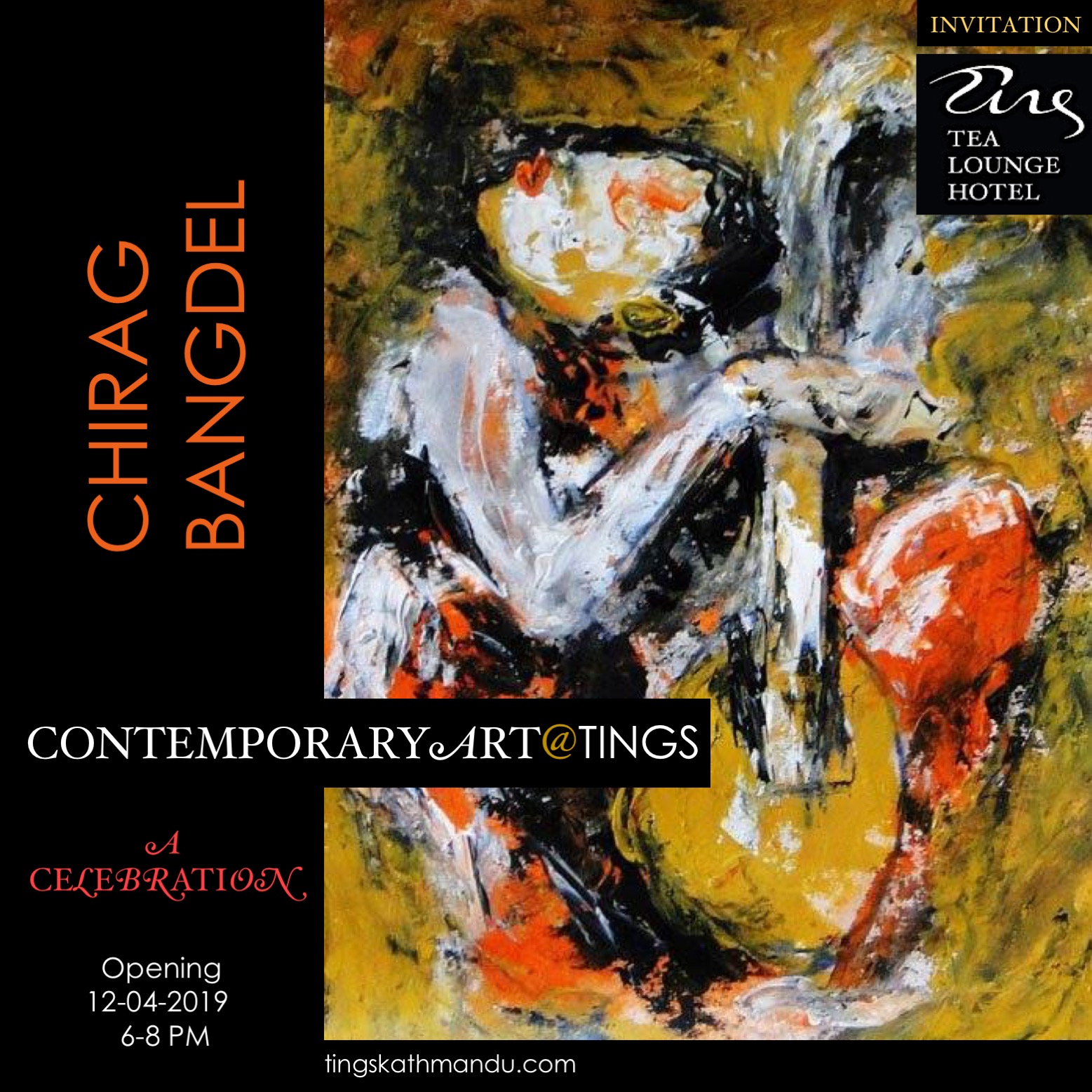